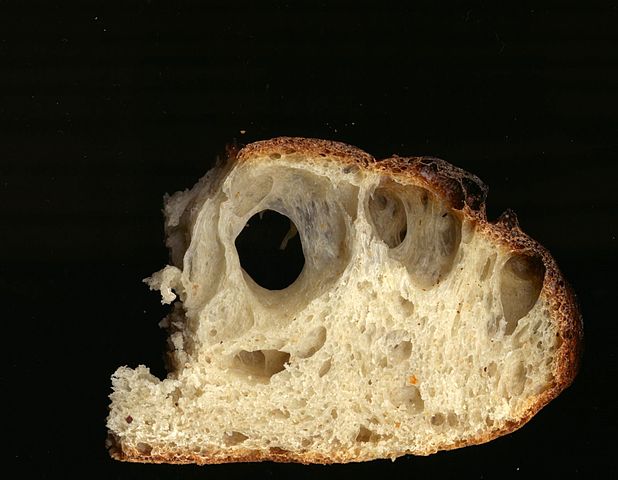 Posted at 11:11h in Healing Your Money Flow by Beth 13 Comments
0 Likes
Share Accept your portion: Bread is widely symbolic money. Image of a slice of sourdough uploaded by and made by Nleamy.

Long ago there was a man on a journey who had with him a loaf of bread. He declared,

So God entrusted him to an angel, commanding,

“If he eats the bread, provide for him. If he does not eat it, then do not give him a thing.”

That loaf of bread remained with him until he died of starvation, never having eaten it.*

Remind you of anything? The divine cruelty at the first level of this story reminds me of the Christian  quotation in Luke 19:26, which has stumped scholars:

“to everyone who has, more will be given, but as for the one who has nothing, even what they have will be taken away.”

What kind of charity is this?

Apparent Contradictions in Religious Teachings about Accepting Your Portion

It is good to steep in the mystery for a moment. Here is another Sufi teaching from a man alive right now, Sidi Shaykh Muhammad al-Jamal, giving the words of a treatment for financial difficulty. In translation, it goes like this:

This is said upon leaving the house.**

There’s a pattern here. We understand the Biblical passage also in Luke (12:48) that much is asked of the one who has much. But why is G-d so mean to the one who has “nothing”?

Who Actually Has “Nothing”?

First of all, who actually has “nothing”? No one.

I encounter this teaching fundraising: “They have no money. We can’t ask them!” Yet statistically, year after year, those who have “nothing” give the most: “Americans with earnings in the top 20% of income levels contributed, on average, 1.3% of their income to charity. Those at the bottom 20% donated 3.2% of their cash to charity—more than double of what their more-wealthy counterparts donated.”***

“The only thing linking…three super-rich people [she had asked to interview on radio about their wealth] is that all of them protested when I applied the term to them. It doesn’t matter that they were among the 1,000 richest people in the country–none of them saw themselves that way.”

Are you shocked? But then do you say or think the same about your own portion?

I now openly refer to myself as wealthy, and challenge people who claimed they or others had “nothing.” It rankles me now to hear people so unappreciate what they do have.

So while I’m no Biblical scholar, I have an interpretation to share with you of the mystery passage in Luke now. Note the boldfacing and you’ll see me coming:

to everyone who has, more will be given, but as for the one who has nothing, even what they have will be taken away.

Have you noticed this, too? If a person always only feels they have “nothing,” nothing they have is ever enough because it is always, still, nothing.

It’s not divine cruelty that starves us when we have bread or takes away our nothing.

It’s us, on the journey, with our freaking nourishing loaf of bread saying to ourselves,

If I consume this, I will die.

RAISING CLARITY on Accepting Your Portion

Who shows greater trust–the ones who use up the “nothing” we have? Or the one who hoards?

The one who trusts feels

If I consume this that I have now, I will receive more.

Let us not be ones who resist what we are given–even and especially in subtle ways like denying what we have by describing it as “nothing”! What sacrilege, truly!

Hoarding is the Opposite of Abundance

Why is hoarding considered good resource management? whereas trust is  evidence of being a Fool? From my earliest work doing moneycoaching on myself as a successful fundraiser without a lot of personal money in the bank, then directly with moneycoaching’s founder, ultimately becoming certified as a money coach with individuals and organizations, I have had a strong archetypal Fool in my make-up. I now see a lot of it is a central trust I was born with. (A trust in the divine, not a financial trust! Interesting pun.) I’m also a Magician, so I have learned to put the Fool’s risk-taking to work for myself and others, constantly engaging with people who take great risk serving others–successfully, in my experience!

From healing my shame about how I have used what I was given, to appreciating both myself and what I was given, to my ability to affirm money outflow as well as inflow, now comes our new contribution to abundance work, “The Healing Power of Moving Money”–offered and to be offered in three states and counting! It is so exciting to be “in the flow.”