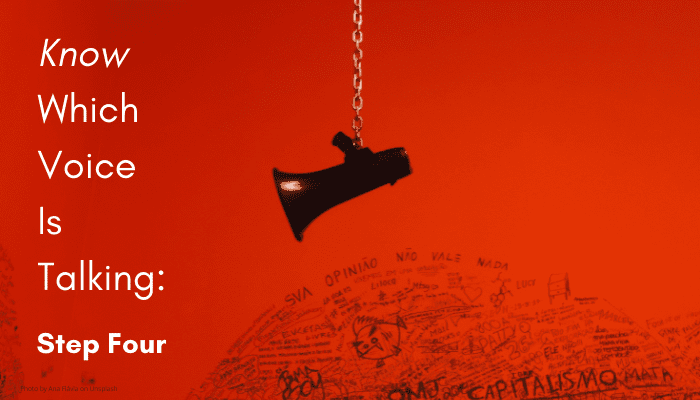 Posted at 19:05h in Series: Know Which Voice is Talking, The Focus and Mindset for Your Calling by Beth 1 Comment
0 Likes
Share

Know which voice is talking inside your head. There are a number of voices inside each of us. How do you distinguish among them? This is Step Four of a seven-part series. Image by Ana Flávia on Unsplash.

There are a number of voices inside each of us: parents, ancestors, trauma/wounding, childhood experiences—and truth. How do you distinguish among them?

Step Four: What, Exactly, Are You Hearing?

Step Four is noticing what you are hearing.

After following Steps One and Two, you’ve noticed you’re not any one of the voices in your head in particular.  Now that you’ve begun to Embrace The Space (Step Three), you’re allowing the voices to natter on without worry. Great! Now tune in.

Eavesdrop: what are your voices actually saying?

What are the voices inside your head actually talking about, exactly?

A Quick Way to Find Out

Tuning in to those voices inside your head is much easier when you give them a specific question to weigh in on!

Try asking them a question—a low-stakes question to start with—and see what they say.

If some of them have no opinion, thank the Heavens, and listen to the ones who do. Remember you are practicing a skill here, and just give the practice some time.

Pro Tip: Do this a few more times before you hit Step Five.