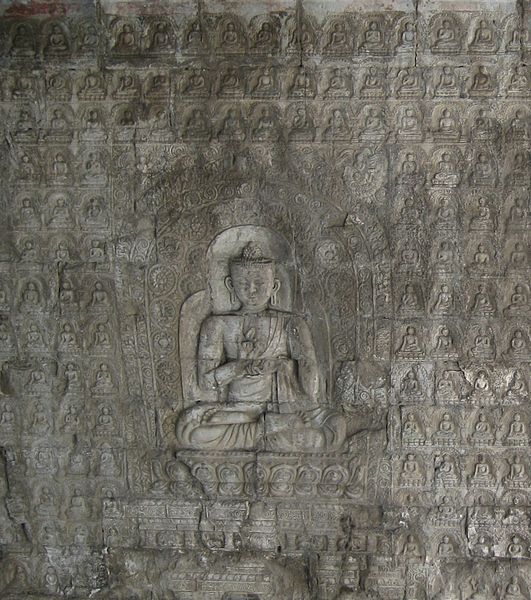 05 Sep That One Thing

Posted at 11:11h in The Time You Need for Your Calling by Beth 2 Comments
0 Likes
Share Even amid the ten directions, we can focus and be led by our one thing. One of the “Buddhas of the Ten Directions” at the Cloud Platform at Juyongguan, China. Image: BabelStone via Wikimedia Commons.

Very often, I have been granted a future I could not have imagined.  All I could see/know was “I want to go there, do that.” And the desire itself would pull me into my next level of growth or Spirit-blessedness. It only shows me a step or so at a time or I get nauseous with overwhelm.

What I know is to reorganize my life around that one thing.

Do you have too many things?

It may look like many things. So I take a step back and ensure I am still following that one thing that is unifying all the many. Or I jettison the things that are pulling me away from that one thing.

This is very far from the ideals of romantic love in the very sweet, tweenybopper song by One Direction, “You’ve Got That One Thing.”

This is me realizing I’ve got it. Or it has me. So what is it?

I know mine, what’s yours?

For me, it is the inward experience of oneness with the cosmos, Love, in my life and the lives of others. I’ve been “runned over” by that truck.

But for you, dear reader, what is it–your one thing?

Kaz Tanahashi said in the Upaya Zen Center newsletter that “my most favorite line of Dogen [Zenji, 12 century Zen teacher and founder of the Soto sect of Zen Buddhism] is…in his fundraising letter.”

In that letter, Dogen sawhere it says, If we could build a temple, we will thoroughly engage in every activity in order to cultivate fertile conditions to transform the ten directions.

“So, he was not saying that we are going to change the world, but he was saying that we are going to build a monastery, train people to live mindfully and to live fully in the service of people, so that way we can help change the world. But he says, to do that, the most important thing is to be fully engaged in every small activity. You take care of the small thing fully and that is how you transform the world.”