Finding Your Self at Work: The Ninth Step, actually making those amends 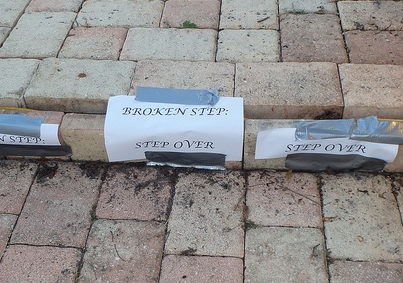 28 Jan Finding Your Self at Work: The Ninth Step, actually making those amends

Posted at 11:11h in Recovery from Capitalism by Beth 2 Comments
0 Likes
Share Actually making those amends: “The step here broke; and I was so concerned for my homeowners insurance that someone would hurt themselves on it…” Caption and image by and uploaded by osseous to Flikr, accessed via Creative Commons Search.

Let’s cut to the chase. Step Nine is we

9. Made direct amends to all people we have harmed [through our addiction to capitalism] wherever possible, except when to do so would injure them or others.

If you’ve been following this series, you started with Step One and you are ready to make amends to those you’ve harmed because of your addiction to the race for money, which we are glossing as “capitalism.”

Or you just got here. If you did, and you know enough about the 12 Steps, this post may make sense but you might want to back up a bit and do the moral inventory of Steps Four/Five and Step Eight’s list of whom you’ve harmed.

After doing both of those, I came up with this short list of people I’ve harmed during my abandonment of my precious self to the Great G-d Capitalism (which you remember is the chase after money, not money itself). I published this list in Step Eight’s post.

I began delving what I can do about these wounds that does no further harm. Right now, here is what I have come up with:

Novelist Joan Didion wrote that “we tell ourselves stories in order to live.” I write these blog posts in order to reflect and live a reflected life. I am wide open to your suggestions for working Step Nine and to your questions and stories in comments to this post. Thanks to the folks who published this list of the 12 Steps. Here is Step Ten. All the Steps to Recovery from Capitalism are here.

Here are the results of my amends so far:  I apologized to my child and talked through with them their experience of my addiction. I did this with one of my exes who had suffered perhaps the most from my never being home because of overworking (and then when I was home, not being well, but only home long enough to get pasted back together to go back out on the road. She said she didn’t think of this as money addiction but as work-addiction. I got to look deeply at their interconnection in my life.